I have 4 Jandy Deck jets in my pool deck and the pool was built last year.  It seems one of the jets has sunk and is almost 3/4" lower than the top of the pool deck..what would cause this to happen eventhough it was poured in concrete and what are my options...I could pull it up a little bit but i dont want to to much because i dont want to break it and i was going to put some spray foam through the weep hole at the bottom to create a base so it doesnt do it again and maybe help push it up and then drill through the foam with a small drill bit to keep water from accumulating after i spray the foam through the body of the jet..  I may have to try and extend the jet nozzle with a pipe nipple to get the nozzle at the right height again because it is spraying off the deck in the hole but then there is the cover issue i would have to make something to keep the cap from falling into the void. if the spray foam is a good idea should i do that to all of them????  Hope someone has some good creative ideas  oh by the way the jets are plumbed with flexible pipe

Would it be possible for you to post a few photos of the deck jet in question, this would help out quite a bit. Below I have posted the instructions on how to post a photo. 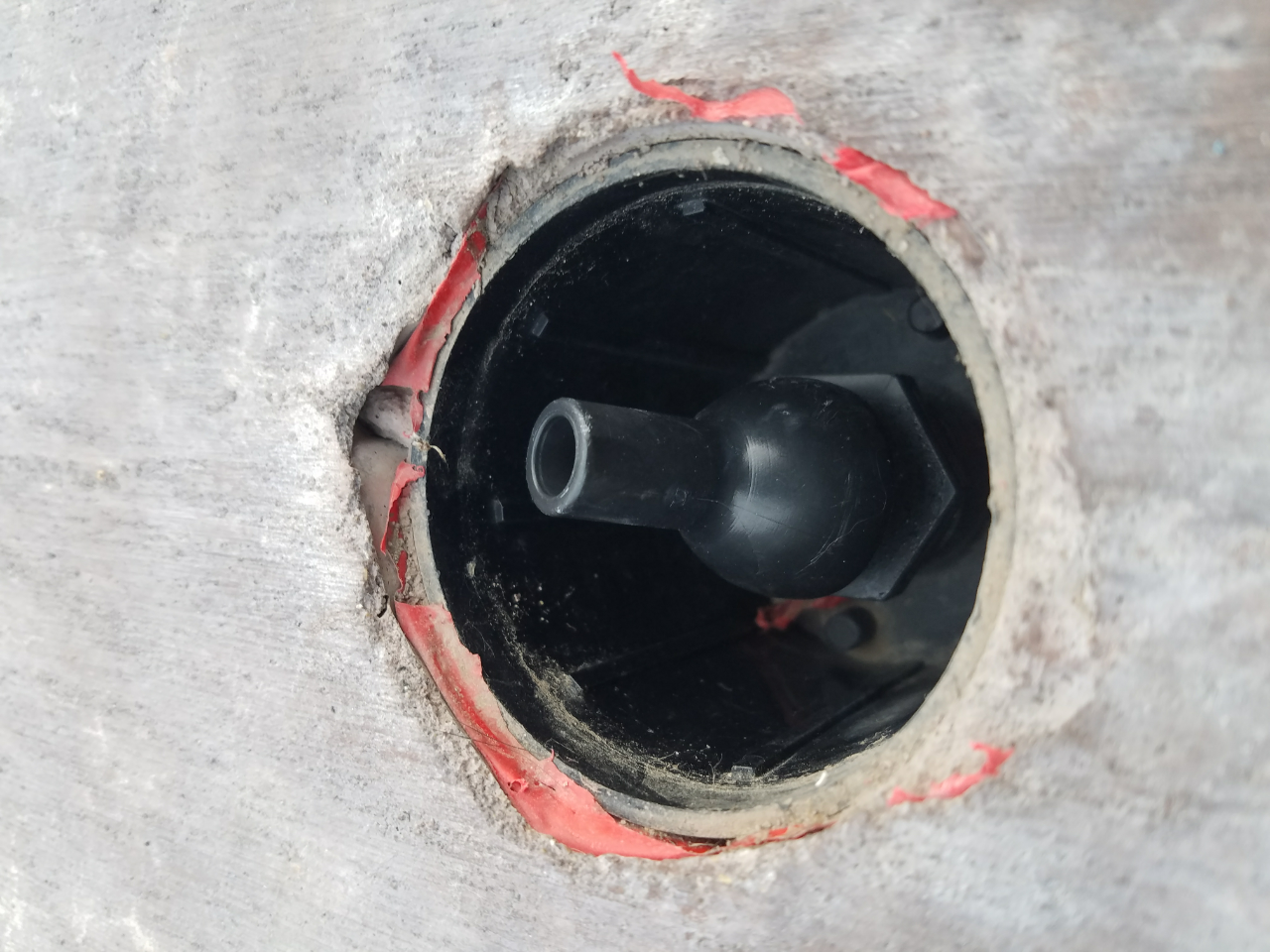 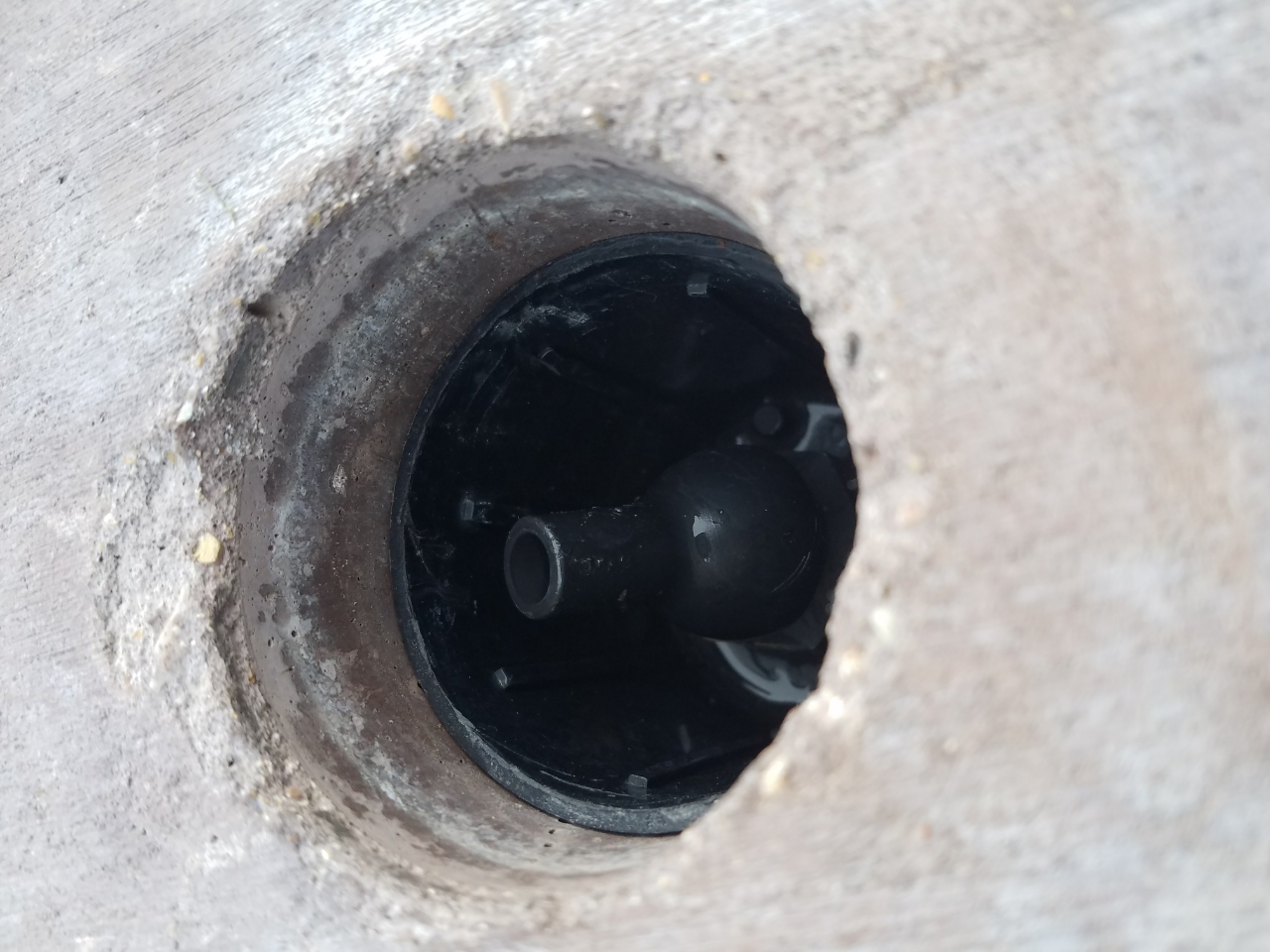 Here is a picture of the good jet and the recessed jet.

I have the laminars on my pool (basically a little larger version of your deck jet) and they dropped a bit but not this extreme. In my case it was the fill material underneath the laminar settled over time, I believe the fill material below the jet was not fully tamped out so after time with heavy rains, the air pockets in the fill material settled and the jet dropped. In my case I have a travertine deck and these tiles are not mortared in, so I was able to contact the company that installed my deck and they pulled up the travertine tiles and added more material underneath the jets and I have not had the issue again. There were also several other areas of the deck that settled over time and they worked on those as well, almost all of the areas was because the fill material was not completely packed when the deck was initially installed which caused settling, however there was one area where there was a huge ant mound under the deck and the ants actually caused that section to settle. I live in Florida so the earth under the deck is pretty much all sand, the decking company adds a material called fines over the sand when laying the travertine deck other people use crushed concrete which I hear holds up a bit better.

I think the reason your deck jets dropped is because the material below it setteled, the reason why it setteled is hard to say my guess would be water washed away some of the material. Possible coming down in the area between the deck jet and the concrete, so possibly a caulk or foam would be a good idea after you get the deck jet raised.

Let me talk with a few of the guys here at the office to see if they have any ideas.

I would agree that the fill caused this but I'm surprised it settled as my fill is all grade 7 stone which is self compacting So I am a little surprised that it dropped but stranger things have happened I wish I had some kind of papers or tile but I'm stuck with the concrete deck and was thinking of coring a hole larger than the jet but don't want to make my deck look bad. Thanks for the info

I had one of the guys here who used to build pools take a look at your post and here is what he had to say....

"On the deck jet's he's really in a bad spot.  I would really recommend he try to get access under those units and trying to raise them. Putting any kind of foam or mortar is just going to be a band-aid to his problem of the fill under the deck washing away. Either from an improper install or a leak somewhere."